Big Red is golden for those serving red, white and blue

Matthew O'Brien grew up in Oshkosh, Neb., population 762, and the self-proclaimed, "Goose Hunting Capital of Nebraska." The local hospital has exactly 10 beds. The newspaper publishes once a week. The nearest major airport is 220 miles away in Denver. 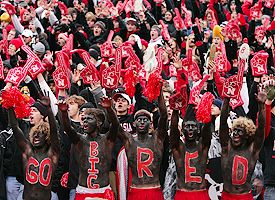 Nebraska fans are well known for being among the most loyal in the sport.
Maybe that's why O'Brien enlisted in the Army in 2004 and became a paratrooper -- 82nd Airborne, 2nd Battalion of the 508th Parachute Infantry Regiment, Delta Company. He did a tour of duty in Iraq three years ago and was deployed to Afghanistan in February. Afghanistan is where he lost the vision in his right eye and suffered partial sight loss in his left eye.

"I don't think they can fix it," he says. "I've been to doctors in Germany, San Antonio, Washington, D.C. They're trying to do the best they can. It kind of sucks because I was right-eye dominant."

Kind of sucks? But this is Spc. Matthew O'Brien for you. Never met a day he didn't like. Glass-entirely-full type of guy. E-mail address begins, "OB1hotstuff. "

"I just serve my country," he says. "Some people do different jobs and I chose this one."

Through it all -- in tiny Oshkosh … in Iraq … in Afghanistan … and now at the Womack Army Medical Center in Fort Bragg, N.C. -- there has been one red-and-white constant in O'Brien's life: Nebraska football.

Even though Oshkosh is closer to the Wyoming and Colorado state lines than it is to the Nebraska campus in Lincoln, O'Brien is a child of the corn. He knows more about Cornhuskers football than its coach, Bill Callahan. Maybe even more than the great Tom Osborne himself.

Eric Crouch this. Scott Frost that. Is there a detail of any Nebraska game that O'Brien doesn't know?

This is where Art Ladenburg, NU Class of '60, comes in. Ladenburg lives in Fairfax, Va., and spent 30 years in the CIA. He knows a little something about special ops.

Ladenburg is nuts about the Cornhuskers. He knew Nebraska was playing at Wake Forest on Sept. 8, knew that Groves Stadium seats less than 30,000 fans, and knew tickets would be at a premium (for ACC games, Wake is required to provide the opposing school with 4,300 tickets; for the Nebraska game, just 3,000 tickets for 15,000 requests). So he bought a Wake Forest season ticket. And he wasn't the only NU fan to pay anywhere from $99 to $190 for the Demon Deacons' six-game home package.

But in a good way. Nebraska fans give a standing O to the opposing team, win or lose, at the end of every game. They're not college football's most patient fans, but they're the most polite. Even most of their hate mail is nice.

Ladenburg is one of those people. He noticed that the Sept. 15 Wake Forest opponent was none other than Army. Bing. "There must be a military hospital nearby," he said to himself.

There was: the Womack Army Medical Center, home of the Warrior Transition Battalion. The WTB includes 345 soldiers, some of whom underwent single-limb amputations, or suffer from mild traumatic brain injury (TBI), or, in O'Brien's case, have experienced acute loss of vision.

Ladenburg decided to donate the Army ticket from his Wake Forest season-ticket package to the wounded soldiers at Fort Bragg. Then he posted his idea on a Nebraska football fan Web site. Before long, dozens, then hundreds of Huskers fans were pledging their Army tickets to the WTB.

"Fans have actually gone out and bought more [Wake Forest] tickets," Ladenburg says. "What group deserves it more than those guys?"

Fans have actually gone out and bought more [Wake Forest] tickets. What group deserves it more than those guys?

--Art Ladenburg
At last count, Nebraska fans have donated about 200 tickets. They'll spring for more as soon as they hear there're 345 Warriors.

"The amount of participation for this is extraordinary," says Lt. William Bishop, who coordinates operations for the battalion. "It's one of the largest contributions we've had."

On Wednesday at Fort Bragg, a first sergeant asked members of the Warrior Battalion, "Anybody here from Nebraska?"

"Well, there's some people who want to talk to you. They have some tickets for a Nebraska game. You want to go?"

Are you kidding? Does a Husker wear red and love lard? Of course, O'Brien wanted to go.

O'Brien can't drive a car because of his eyesight, so a friend from the base shuttled him 2½ hours from Fort Bragg to Winston-Salem. Nebraska fans invited him to a party Friday night, and on Saturday he watched (sort of -- his eyesight made it difficult to even read the scoreboard) the Huskers beat Wake, 20-17. It was the first Nebraska game he had ever attended in person.

Cornhusker fans, you can't beat them. I hope I get a chance to thank everybody."

Now he has a ticket for the Army game.

"And I got lucky on that one too," he says. "The guy who had the tickets didn't know I was already going to the Nebraska game. When I told him -- and offered to give him back the Army tickets -- he said, 'No, no, you look like you love football more than I do.'"

He does, which is why he'll happily take whatever seat they give him Saturday afternoon at Wake. And if the traffic isn't too bad, he might make it back to Fort Bragg in time for the second half of the USC-Nebraska game.

Whatever happens, O'Brien says he owes Nebraska fans a handshake.

"Cornhusker fans, you can't beat them," he says. "I hope I get a chance to thank everybody."

Actually, Matt, it's the other way around.

Gene Wojciechowski is the senior national columnist for ESPN.com. You can contact him at gene.wojciechowski@espn3.com. He co-authored Jerome Bettis' autobiography "The Bus: My Life In and Out of a Helmet," which is available now.