Here's a closer look at two of the players whose jerseys will be retired Saturday, Clarence Swanson and Wayne Meylan.

Shatel: Huskers have run the gamut in openers; let's hope for efficiency, energy over flash Discussions and Comments are Greatly welcomed. Huskerspot is for Husker Fans to get together, read, discuss and chat about everything Husker! Shatel: Huskers have run the gamut in openers; let's hope for efficiency, e...

Forget the Tunnel Walk. I’m thinking Bob Diaco just appears on top of the Giant Board, in a Spider-Man get-up.

Forgive me. It’s Opening Day. I love Opening Day. It’s a day we renew our vows down at the church of Holy Moly. Men, women and children invited. Cynics, not so much.

In Nebraska, this is a state holiday and Husker fans have their favorite memories and usually group them under headings.

There were the Anxiety Openers. Those came any time Nebraska christened a new head coach — five times since 1973. There was the Frank Solich opener, otherwise known as the day Louisiana Tech’s Tim Rattay threw for 590 yards.

There was the Mike Riley Opener, aka the Hail Mary Opener.

There were the Misdirection Openers. In 1977, Jack Thompson and Washington State won in Lincoln — the week before Nebraska bounced back to beat Bear Bryant and Alabama. In the 1996 kickoff, the Huskers walloped Nick Saban and Michigan State, 55-14 — the week before getting ambushed in the desert by Arizona State.

There were the Kick-Butt Classics in the Meadowlands. In 1983 (Penn State) and 1994 (West Virginia), the Huskers were coming off years when they fell just short of a national title — and announced they were serious this time.

And there was 1986, when Husker fans were nervous but not because of the first night game in Memorial Stadium. Three days before NU faced No. 11 Florida State, the NCAA declared 53 Huskers ineligible for one game — and seven for two — because of violations involving complimentary tickets in 1985.

What a mess. What a bizarre opener. NU appealed to the NCAA and got a stay of the suspensions — and rolled Bobby Bowden, Deion Sanders and Florida State under the lights in Lincoln.

I even heard from a Husker fan who said his favorite opener was the 25-7 win over Maine in 2005 — in which Bill Callahan’s West Coast offense scored one touchdown. Come to think of it, I think that was a Hawkeye fan.

Speaking of Iowa, that brings us to Saturday night, to Arkansas State, and the Reset Opener or Mouthwash Opener.

Husker fans have waited eight months to get rid of the awful taste from the end of the 2016 campaign. People who note that Riley enters his third season under pressure should remember that Riley’s Huskers were 7-0 and ranked No. 7 in the College Football Playoff poll on Oct. 29 at Wisconsin.

That’s when the first of four losses happened, including 62-3 at Ohio State and a combined 78-34 to Iowa and Tennessee.

Those losses were about cracks in fundamental football and Husker culture as much as anything. Now, on Sept. 2, 2017, the hope is that a new quarterback and defensive coordinator can make that better.

Tanner Lee and Diaco have been treated like Superheroes. But they won’t wear capes Saturday night.

This is the most anticipated debut of a Nebraska quarterback I can remember. Taylor Martinez didn’t enter the picture until late August 2010. Sam Keller had some hype, but not of this nature. Zac Taylor sneaked in the side door.

Turner Gill and Tommie Frazier didn’t start out of the gate. You might have to go back to the days of Scott Frost, Bobby Newcombe and Eric Crouch to get quarterback buzz of this type. It’s big.

Meanwhile, Diaco’s debut reminds me of the 2003 opener against Oklahoma State — Bo Pelini’s debut as leader of the Blackshirts. There was an unmistakable energy that day in Memorial Stadium as the Blackshirts forced five turnovers and scored when Barrett Ruud picked up a fumble as the Huskers beat Les Miles’ Cowboys.

I don’t expect Diaco to reinvent defense tonight. I expect some mistakes in the new 3-4, some communication miscues or coverage busts. It’s gonna happen.

What I expect from Diaco is that same energy you could feel in 2003. Blackshirts flying around, making plays, causing havoc and turnovers, and that jazz.

I don’t expect Lee to heave lightning bolts around the Nebraska sky or wow folks with his arm. That could happen, but over the last eight years, Husker fans have been treated to a variety of quarterback highlights.

I’m interested in seeing his early chemistry with offensive coordinator Danny Langsdorf. With all the attention on Diaco, Langsdorf has been behind the curtain this preseason. But it’s sort of a debut for him, too.

Langsdorf defended Tommy Armstrong earlier this week and that was great to hear. Armstrong did a lot of good stuff and he inherited this awkward offensive fit.

But it’s clear Lee is more of what Riley and Langsdorf are comfortable with. I expect to see some of that tonight. It will be most interesting to see how much Langsdorf gives Lee to do in the opener, the trust factor, etc. — understanding that tonight might be vanilla in case, you know, Oregon watches.

I’m really curious to see how Langsdorf manages this offense. There aren’t a lot of superstar types on this unit. There isn’t an obvious area of strength. Can Langsdorf create one? If the line can’t keep pressure off Lee, does Langsdorf dial up screens or quick perimeter passes? Stuff like that.

I also think Langsdorf’s offense can ease the load on Diaco’s defense by eating clock. Though Diaco won’t ever ask for that, he might need it early in the season.

It’s sort of a debut for special teams and a final act for senior De’Mornay Pierson-El, who looks and sounds good.

And, of course, there are freshmen who will play. And as Lee and Diaco make an impact, it will be fun to see what new faces get a light shined on them. But even more than “who,” I’ll be looking for the “what” and “how” tonight.

There’s even an Arkansas State coach, Blake Anderson, who made an innocent comment last spring that the Huskers were “beatable.” Most people filed that under the category of what a coach wants his team to believe. And Washington State, Southern Miss and others have proven the Big Red vulnerable once in a blue moon.

The Huskers shouldn’t need that as bulletin board incentive. Nebraska will need to play well to win. But Nebraska needs to play well, period. Every week.

That’s what tonight is about, what this season is about. It’s time for The Program to get back to basics, consistency and execution and energy and all my other buzzwords.

Maybe there’s a karma thing going on. Years ago, I used to complain about how boring Nebraska football was, running the same offense, winning by big scores, methodically chewing up opponents. I wished for variety, some drama.

So now here I am calling for boring again. I think that’s what you call getting old.

Opening Day, though, never gets old. "I think in my first year at Kansas (1988), we were really down in numbers," the former Jayhawk head coach told the Journal Star earlier this week. "We had only 51 players and just seven offensive linemen."

On the other hand, Nebraska in 1988 had, well, a full complement of players.

"Before our game that year, I walked up to (then-Husker offensive line coach) Milt Tenopir and said, 'Milt, what are you doing? I counted it up and you have 63 offensive linemen out there,'" Mason said with a chuckle.

I think Mason was exaggerating, if only slightly. But you get the point. Nebraska often was the bully in those days.

The Huskers battered the Jayhawks that gorgeous October day to the tune of 63-10.

He thinks back on his days at Kansas (1988-96) with a certain fondness. He said he enjoyed bringing teams to Lincoln and looks forward to being back in town Saturday night serving as color analyst for BTN's broadcast of the Arkansas State-Nebraska game.

Even though Nebraska's strength and prestige as a program have waned since the glory years, it still should be able to impose its will on the visiting Red Wolves from the Sun Belt Conference.

And, no, I'm not underestimating Arkansas State, which has played in bowl games in the past six seasons.

The Red Wolves return 10 starters from last season's 8-5 team (7-1 Sun Belt), a crew that allowed only 11 rushing yards in a 31-13 victory against Central Florida in the Cure Bowl.

"I think it's a good, solid football program — probably better than most people who didn't know anything about it would give it credit for being," Mason said of Arkansas State. "Put it this way: Arkansas State probably isn't good enough to straight-up beat Nebraska. But Arkansas State is good enough that if Nebraska starts beating itself, the Red Wolves could come in and win."

He notes Arkansas State dropped its first four games last season — including a 51-14 loss at Auburn — then came on strong.

"That tells you their coaches and players are made of the right stuff, and they believe," Mason said.

I was glad Mason said the word "believe," because belief is a critical word for Nebraska as it begins the third season of the Mike Riley era.

Bob Diaco, the Huskers' first-year defensive coordinator, teaches and leads with an unyielding passion that stems in part from his unwavering belief in his 3-4 system. Players pick up on his confidence and in most cases probably can't help but believe in the defense. That's my read of what's occurring in the NU camp.

But let's see how well the Blackshirts respond to adversity. That's always the test, right?

Meanwhile, quarterback Tanner Lee allows Riley and offensive coordinator Danny Langsdorf to operate their pro-style system at its full capacity. Lee seems genuine when he expresses confidence and belief in the system and his coaches.

Such positive energy can become contagious.

If Lee operates at the level I envision, and his line steps up its game, Nebraska just might win nine or 10 games. But 10 seems like the ceiling with Ohio State and Penn State on the schedule.

Mason, who also serves as a studio analyst for BTN, recently put the Huskers in a category of teams that could win 10 games.

"Would 10 wins be a great year for Nebraska? Absolutely," he said. "It's not a shoo-in by any stretch of the imagination. But sometimes the third year is the charm, any way you look at it."

In order to win 10 games, Nebraska's transition from a 4-3 defense to a 3-4 would have to transpire smoothly — a challenging task.

"It's not about what the coaches know, it's what the players know," Mason said. "Just look at Iowa. The Hawkeyes have played that same damned defense since Kirk Ferentz got there (in 1999). It's not fancy, but it's good. If you hurt them on a particular play, you'll see the linebacker make the adjustment right away."

You have to wonder how well Nebraska's defense will make adjustments in the heat of battle.

Bottom line, Arkansas State has enough talent to cause NU stress on both sides of the ball.

"The thing I always used to worry about when you play a team like this was, don't let them hang around too long," Mason said. "The more they hang around, the more they start believing."

For what it's worth, I believe Nebraska fans will come away from the opener encouraged, perhaps even excited.

VB: Huskers improve to 2-2 on the season 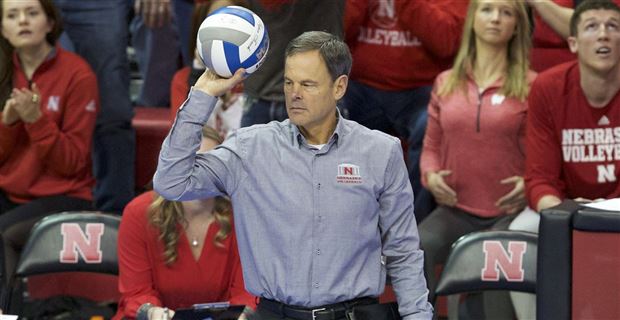 Can't argue with that.

Brandon Reilly appears to have gotten bad news from the Buffalo Bills on Saturday.