The Perceptions of Media Bias

Here's a little article from the guys at Corn Nation and the obvious Bias that exists in local media. 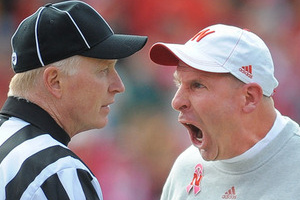 Some media outlets like to promote this as the norm for Bo Pelini. When they do that, they are showing their biases. (Photo by Eric Francis/Getty Images)

END_OF_DOCUMENT_TOKEN_TO_BE_REPLACED

It seems that no matter where you look, a media outlet is looked at as being biased. Fox News is regarded by many as a right-wing shill. MSNBC is viewed as the mirror image for the left-leaning politicos. CNN is viewed as both, strangely enough, by the folks on either extreme of the political spectrum.

Same thing for local media; the Omaha World-Herald generally takes conservative views while the Lincoln Journal Star generally is a little more liberal. It'll be interesting to see whether Warren Buffett's purchase of the Omaha paper changes its endorsements this year, as Buffett is a registered Democrat.

But politics isn't the point here. (If you want to talk politics or Fox/MSNBC bias, please go visit Drudge or HuffPo.) Rather, we're talking about the appearance of bias in media outlets with respect to their coverage of the Huskers.

We've seen numerous examples that both of the major Nebraska newspapers have a tilt to their coverage of Nebraska athletics. The Lincoln Journal Star has a reputation of have a pro-athletic department bias, while the Omaha World-Herald seems to have a growing perceptionjust the opposite way. Some fans see it even more clearly and distinctly than others. Certainly the World-Herald publishes more critical commentary than the Journal Star...but is one necessarily better than the other? Depends on your perception.

For example, the Lincoln Journal Star ate the World-Herald's lunch during the basketball coaching search. In the end, Brian Rosenthal of the Journal Star had the Tim Miles story first, and the World-Herald got into a snit over getting called out by Tom Osborne. Another example was the distinction in how Pelini's comments on how his team handles fan and media comments were portrayed in the two papers. The World-Herald twice took Pelini out-of-context and gave a completely different impression than the Journal Star.

On the other hand, Lee Barfknecht was the journalist who first raised the issue of the Nebraska athletic department's poor execution surrounding the men's basketball program...nearly a year before a booster took out an ad in the paper to make the same case. There's room for both approaches...and both can be useful. And needed, mind you.

You can also see it on the radio. The Husker Sports Network (formerly Pinnacle Sports Network) paints a mostly positive worldview of Husker athletics nightly on their SportsNightly show. If the hosts let the show get too negative, they'll hear about it. Gary Sharp was allegedly let go from hosting duties back in the early days of the Steve Pederson regime for being critical. And who can forget Jim Rose trying to blow sunshine and lollipops all over Pederson and Bill Callahan before their world crashed in 2007?

On the flip side, KOZN (1620 AM) radio's Kevin Kugler and Mike'l Severe took a more critical view of the Nebraska athletic program. Pederson tried to ban Kugler from Husker broadcasts on Nebraska's public television network NET briefly, but that failed to stop them. In reality, Kugler played a more moderate role, almost CNN-like role. Some people called him a Husker homer while others called him a Husker Hater. Severe has grown increasingly critical of Bo Pelini as of late, insisting that he's out actively seeking out other jobs and hates Nebraska and it's fans. He didn't think Pelini was qualified to take the job, and still thinks he's in over his head. (Apparently still favoring Paul Johnson (43-22 at Georgia Tech) over Pelini (39-16) to be the head coach.) This summer, KOZN has added Sharp and former Husker Jason Peter to host a morning talk show. Peter was known as being critical of Pelini in a previous talk show run in Lincoln. This fall, KOZN is also adding a post-game radio show titled "Big Red Overreaction" (a label blatantly ripped off from CornNation) featuring an icon of a bawling Husker fan in diapers.

I don't know about the Lincoln sports radio stations and whether they cater to being critical, fawning, or in the middle; their signals don't make it to Omaha.

Once fans conclude that any media source is biased, it colors your judgement of everything they say from that point forward. If you don't like Dirk Chatelain, you're going roll your eyes whenever you come across anything he writes...even if it turns out to be a really good feature article, like his profile of Daimion Stafford. People who don't like Steve Sipple are going to automatically look skeptical at anything he writes.

Biases also exist in the electronic forums. Here at CornNation, each author has its own biases. I was unabashed in my criticism of Bill Callahan, and I have generally positive opinions of Bo Pelini. I don't consider myself a journalist, so I don't have a problem with admitting that. (Many of you probably have figured that out already.) Others here have different opinions, and some of our new writers have more critical opinions. I'm hoping that this will help balance out the opinions on CN in our roundtables.

Ideally, we'll get to the point where we focus more on what is being said and not on who said it. Moderation is almost always a good thing, and in the coverage of Nebraska football, is something that should always be the goal

Can't believe Bo doesn't take his own advice. He tells his players to stay away from social media and ignore press clipping critics and commenters, and then allows himself to get all worked up over us coffee-house quarterback's commentaries. Bo needs to pursue his goals and ignore the whirlwind outside. Dr. Tom could tell Bo all about being under the NU microscope.