The worst thing is, we get to hear more of that.  "Welcome to the Big 10."  I just threw up a little.  This game was terrible.  We did everything possible to ensure  we wouldn't win.  Fumbles, personal fouls, blocked kick, shanked kick, not capitalizing on turn overs in our favor, missques, bad play calls following good play calls, and on top of that, Michigan came to win.  Played to win, and smoked us.

If your eyes hurt as much as mine after watching that crappy excuse for a game, here's all I can offer to help with that:

We had better man handle Iowa on Black Friday...

Permalink Reply by Shayne Seibert on November 19, 2011 at 4:10pm
All I will say for now is.... wtf happened? Did we forget how to hold onto the ball? Missed snaps, dropped passes, dropped int's? O-line couldn't have stopped UNK today, hell the d-line couldn't have either!

Martinez needs to ride the bench next week. We are bowl bound, so next week means nothing now. Build for next season and let somebody who WANTS to play in there.

I'm not toning to cash the defense any further, because you were on the field for 45 freaking minutes. The offense bears the brunt of my fury.
Beck, you're done. Www need quality receivers on the field field and, while you didn't put the on the team, your job is to get them in the best position to succeed as possible. With Martinez on the field, that will never happen. 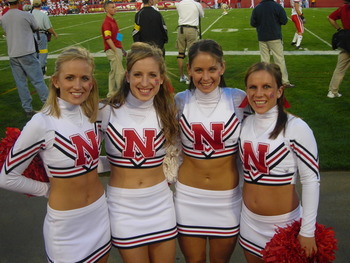 Martinez is not, and will never be, an option QB. I blame Pelini for firing Watson and not have a better alternative. I'm not sure what Beck is trying to do, but his "3 and out" offense is wearing our defense out. Martinez is the best QB we have and we're certainly not going recruit anyone better, so we need to work our offense around his ability, instead of trying to appease fans and relive 1997 glory.

He was playing fine last year under Watson until he got hurt.

And I don't know why people keep saying our offensive line is good or something.  They're not...

Now that's what I call a front four!

What we missed in tackles today, we made up for in dropped balls!

Deamon I agree. I also threw up a little in my mouth watching that debacle. I really think that Pelini replaced Watson with his evil twin. I see alot of Watson in Beck's play calling and it makes me ill. We have much more talent than what is being shown on the field. I think(and it's probably a benching for doing it) Martinez ought to audible out any time Beck wants to run it up the gut for the 50th time. We got speed and front blocking... USE IT !!!

Thanks Daemon!  Needed that!

It was quicksand man....You're playing and you think everything is going fine. Then one thing goes wrong. And then another. And another. You try to fight back, but the harder you fight, the deeper you sink. Until you can't move... you can't breathe... because you're in over your head. Like quicksand. Quicksand's a scary motha, man. I mean, first of all, it suck you right in, and even if you scream, you get all that muck in your mouth...

Let's hope we can stay out of the quicksand against the hawkeyes...although if I eat enough turkey I may miss the second half.  And the only thing that can help us next year is a pocket passer with 300 pound line man on both sides of the ball.

Thanks for the medicine.

Just read the Weird Herald's take.  Had some time to think about it more, and here we are.  8-3.  I had thought this was a strong possibility.  Go back and look at my preseason picks.  I knew we'd lose to Wisky (just not that badly) and thought we'd lose to Michigan State (not Northwestern), and figured Penn State could easily go either way.  Well it could have but we won, only to have Michigan smoke us.  So I guess I was right in a strange way that we had a chance to be 9-2 or 8-3 at this point.  We sure did have that chance.  Unfortunately it's the 8-3.

My question is, why do I get so disappointed?  If we're where I thought we'd be, what's the problem?  If we're having 9 and 10 win seasons, why does it feel like underachieving?  If Dr. Tom couldn't win the big one, and I think it's crazy that fans wanted his head for it, why does it bother me so much that we're losing the big ones?  Is it that I simply spoiled?  That the 80's were awesome, and the 90's simply impossible?  Is it because I felt like I payed my dues still cheering for the Huskers  through Callahan and dealing with such a horrible run had to earn us bonus points in the karma department?

Sure, that's probably some of it.  However, I also think that the blow outs are getting to me.  Losing doesn't kill me, but losing big does.  If Penn State had managed to pull off a last minute score and let their emotions carry them to victory, I wouldn't have felt bad.  Sure I want the Huskers to win, but a close hard fought loss is much easier to stomach.

Dropped balls, fumbles in our own red-zone, costly personal fouls, are all to blame for these big losses, but who's to blame for these mistakes?  Players? Refs?  Nope, Coaches.    I'm still not ready to say Bo isn't the guy.  9 and 10 win seasons aren't something to feel bad about.  But I will say this, He needs to figure out how to play tighter games, how to win on the road in big houses, and how to avoid costly mistakes, or he's going to have the same fans who wanted Dr. Tom's head calling for his.

I agree with you on the blowouts.  This loss was so bad that people (who don't watch or no absolutely know nothing about college football) were coming up to me or writting on facebook ripping Nebraska.  Just imagine what schools like LSU, Alabama, Arkansas, Oregon, and Stanford would do to us?...they would hang 50 easy....and if we were still in the Texas Conference, I think we'd hit 5 losses....no doubt in my mind. Heck if we were in the Pac-12 or SEC, we might need that Fresno win to squeek out a bowl.

One thing I kept saying was that we were young. We have a young offensive line, QB, receivers, and we have a lot of freshmen who are significantly contributing.  The problem is all of the other teams are pretty young too so that factor will just offset itself down the road.

Bottom line is I hate our offense and Beck has no idea what he is doing. Everyone in this town wanted Watson gone, but just like the old saying goes, "be careful what you wish for." Remember Watson groomed Joe Ganz.

Get used to the new offense.  Run up the middle - no gain. Option left - 5 yard loss. Throw a bounce pass Enunwa on 3rd and long. Get used to the RedLobster.com Bowl every year.

Tomko - Do you think that we could beat North Central?

Should Uncle Tom hire John Thorne?  At least he is a winner!

Not a Bo fan.  Not a Beck fan...but the quadruple option handoff to Rex and pitch to Abdullah was a Boise-style, great play that left Meyer, Spielman and the scUM "D" with their jaws dropped.

Then we never scored again...LOL!