I'm trying to tee off! & I Like Soccer More Now

And you can go here for more info on the new Miss Nebraska.

Trying to Spread the Husker LOVE

I just created and uploaded my newest video (to YouTube) trying to get the word out about Husker Spot! You can view it below...


There will be more videos coming, I'm planning on doing some video responses to some of the football forum topics. Now I'm just waiting for some of the other members of Husker Spot to get their VIDEO on!!!

•In Bo We… Continue

National college football champs LSU kicked their back up quarterback, Ryan Perrilloux off the team. Perrilloux's father recently died on February 7 and he had been getting into other trouble, including being late or missing practices and class. You can read more here.…

Jared Allen got traded to the Minnesota Vikings!

Jared Allen got traded to the Minnesota Vikings, and this is how this weatherman feels about it.


OMG that is too… Continue

No Huskers Taken in First Two Rounds of NFL Draft

In case anyone was wondering, no Nebraska football players were taken in the first two rounds of the 2008 nfl draft. Rounds 3-7 are tomorrow (Sunday), so hopefully some will get taken then!

Here's a list of the players drafted to the NFL (minus Nebraska and Iowa players!) here.

As a side note, some website names I pondered of naming this site back when it was just a twinkle in my eye:)…
Continue

Quick stats on this kid: he can bench-press 225 pounds 12 times, run the 40 in 4.62 seconds, and he sings in the choir. Quite an all around individual! He'll probably play as a WILL linebacker.

After attending the spring game he was quoted as saying, "The tradition and pride in that program is mind blowing". Well, thanks Shawn Bodtmann! Glad to have ya! You can read the full story… Continue

College Football is Different Because...

Don't get me wrong, I'm a fan of both NFL and college football, but college football just seems a little more special to me. I'm sure other Husker fans would agree with me! Since our nearest pro team is the Chiefs (or Broncos for some), we've probably been a little conditioned to lean towards the Skerz. That's all we got!

Here's a great article on the difference between college… Continue

Paterno Too Old To Coach? 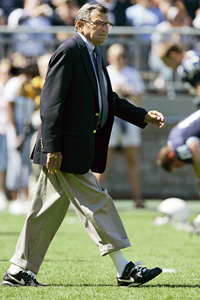 Did you know he still watches football tapes, not DVDs? He says that if something is working for him, why change it. It's a pretty good read. He's an icon to the Nittany Lions, just like Dr. Tom is for us Cornhuskers. Anybody think he should stop coaching? Has he… Continue

NE Patriots Got a Gift!

These last few days of sports radio there has been a lot of talk about the new NFL schedules for the 2008-2009 season. I can't wait for the college season to start, but I'm getting excited about the NFL season as well!

You can get the… Continue

Well, just got done watching the Nebraska men's basketball team lose to Kansas for the third time this season. I'm sure everyone thought that we were going to get blown out by twenty plus points, similar to the first two times we played KU. This time was different!

I didn't tune into the game until after the tip off, but watched from about 12 minutes left in the first half until the final buzzer. FIrst off, I couldn't believe that we were leading at half-time! Our… Continue

Here are some different people's perspectives on Nebraska's Coach Pelini and former Husker Pederson I've found while on the world wide web. Some great stuff here.

First of all I want to say how happy I am that Bo Pelini is the Huskers new coach. I am so stoked that Bo is the new head coach of my Huskers I could kiss Tom Osborne right on the mouth .As far as I am concerned this is the best news I have heard out of Huskerville since that idiot Steve Pederson passed… Continue

How tough is Bo Pelini? read this-

Bo Pelini once took a mulligan on a hole in one.

Jesus has a WWBPD stick on his SUV!

Bo Pelini is all of Jay-z's 99 problems

Bo Pelini can dribble a football

When Pelini takes a swim, he doesn't get wet, the water gets Pelinied.

Bo Pelini doesn't read offenses. He stares them down until he gets the information he wants.

Before Chuck Norris goes to sleep at night, he checks his closet for Bo Pelini.

Bo Pelini is definitely the fan favorite for being the next Husker football coach. I'm taking down the poll on the HuskerSpot home page today, since the search for the new Husker coach has been (supposedly) narrowed down to Bo Peilni and Turner Gill.

The final tally of the "new Husker coach" poll is:…
Continue

He had to announce someone as head coach to take care of some of the off-campus recruiting responsibilities.

How awesome (and far-fetched) would that be if Osborne was head coach again??!

You can read the full story of this… Continue

As creator of HuskerSpot, I spend a lot of time on the internet - emailing, reading about the Huskers, and buying Husker clothes and merchandise. For your convenience, I've compiled a list of websites that offer some great deals on Husker gear, Nebraska Cornhusker merchandise, etc.

Bo Pelini has been contacted as being the Huskers football new head coach. Exciting news, yeah!

There had been rumors earlier in the week that Bo had been spotted in and around the Lincoln area, and that he possibly had purchased a house.

You can read the full article about Pelini here.

Thanks everyone for participating in the first HuskerSpot.com poll! The results for this poll "Will Nebraska beat Colorado and reach a bowl game?" are as follows:

Too bad the poll didn't help our guys out on the field on Saturday..... oh, well.

There will be more polls to follow, so stay tuned!

There's a new Husker football book out, written by a current college student of the University of Nebraska - Lincoln. It's called, "The Nebraska Way" by Jonathan Crowl. There has been a lot of talk about this new book - especially with the current coaching situation. Note: I haven't started this book yet, but I have heard that "by the time you reach the end of this book you see clearly how
wrong guys like Callahan and Pederson are for Nebraska, and how right guys like
Osborne,… Continue